Tools are constantly evolving. Humans have been forever upgrading the tools our ancient ancestors invented to make our lives easier. For instance, one time my dad taught me how to compress a brake caliper piston with a piece of wood and a c-clamp. It was a pain and not very glamorous or high tech, but it got the job done. Then one day, I was in the auto part store getting some tools to change my brake pads. As I was looking for whatever tool I  needed, I came across an ingenious tool that makes compressing a caliper very simple. It’s basically the piece of wood and c-clamp engineered by a NASA scientist. Not really, but you get my point. Ever since then, changing brake pads (and my wife’s and my friends’) has been a breeze and has made my life easier.

The Right Tool for the Right User Experience

Well, one day, I had the same kind of Eureka moment when a developer told me about a program called Sketch. Sketch is a lightweight program for creating wireframes, mock-ups, and prototypes. Graphic designers are creating these all the time, and traditionally they were created with Photoshop or Illustrator. The problem with Photoshop and Illustrator is their primary functions are photo editing and illustration, respectively.

So, having a program that is solely made for user experience (UX) and user interface (UI) design was something the design world needed. Sketch came out just over eight years ago, and since then, several similar programs have come on the market. One of those programs was Adobe Xd, which came out in early 2016, so Adobe was a little late to the game. Regardless, Xd has risen as the top contender to Sketch in the UX design industry.

Which One is Better, You Ask?

Well, let’s take a look at these programs and see.

Both programs are vector based, which means the designs created are easily scalable and relatively small in size. If you want to learn more about the importance of file size, check out this blog. Xd is available for both PC and Mac, whereas Sketch is Mac only.

Price is usually the leading factor when it comes to making a decision on a product or service. Sketch is a one-time purchase or $99. (Updates are free!) I believe there is a student discount, as well. Adobe Xd on the other hand, comes with the Adobe Creative Cloud Suite, which is a monthly subscription of $49.99 for a single user. Students can also get a discount for the Creative Cloud for $19.99.

Winner: Sketch’s one-time purchase of $99 is incredible for such a powerful program, and no one likes a monthly subscription (although, most creatives have the Creative Cloud already, which includes Xd).

When designing for UX and UI in Illustrator of Photoshop, all of the options can become overwhelming. Both Sketch and Xd have a very clean, minimalistic interface so users can focus on the UX/UI design. Both programs have options to customize the interface to match your needs. They also have intuitive interfaces, but if you have used any Adobe design programs in the past, such as Photoshop, Xd’s interface will be easy to learn.

Winner: Since Xd has a smaller learning curve for designers who have used Adobe programs in the past, Xd is the winner.

Prototyping in Photoshop or Illustrator isn’t very efficient. To create prototypes in Sketch, you need InVision, which creates prototypes seamlessly from your Sketch designs. Xd on the other hand, has a powerful prototyping feature built into the program. With Sketch + InVision, you can fine-tune your screen transitions more so than in Xd, which is a minor detail, but may be important to some. Xd, has a device preview, where you can test apps and web pages on your phone, iPad, etc. There is also a messaging feature in Xd to get feedback on your prototype.

Sketch’s x-factor is plugins. Sketch has a thriving community which has created many functional plug-ins. Check some out here. Xd’s x-factor is its repeat grid function. Xd has an incredible repeat grid feature that takes the time and pain out of replicating frequently used content.

Winner: While plugins are useful, third-party plugins require ongoing support from their developers when new versions of Sketch are released. The repeat grid feature in Xd will save designers the time and pain of creating frequently used design elements, which is a win for all designers and Xd.

With the growing importance of prototyping for companies in several industries, programs like Xd and Sketch fill the need to create interactive prototypes. Xd CC 2018 was just released in October of 2017 and is more powerful than ever. So if you are already subscribed to Adobe Creative Cloud, check it out.

If you have a Mac and don’t want to pay a monthly subscription to Adobe, you could go the Sketch + InVision route (Get a Free Trial of Sketch here) as they are very capable of creating UX/UI designs and prototypes. Along with Sketch and InVision, you can check out Affinity Photo and Affinity Designer for image editing and illustration respectively. Both are a one-time payment of $49 and are very comparable to Adobe’s programs. Check them out here. 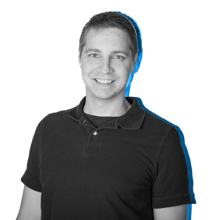 Luke is committed to the Zen art of converting website users to raving fans through use of visionary, graphical content. He helps balance all content campaigns with the right images and the preferred way users tend to consume online resources. He’s very good at drawing but you could never tell by his handwriting. He believes talent is overrated, but hard work always pays off.