What is Crisis Management & How Should You Use it?

Last week I was on my way to Minneapolis when I decided to tune into my current obsession: Michael Stelzner’s Social Media Marketing podcast. It’s one of my favorites because it covers a wide range of topics in the marketing industry – everything from generating leads with live video to Facebook group engagement and how to use predictive analytics. It isn’t just about Facebook, Twitter, and LinkedIn – it’s so much more

PR enthusiast in me jumped for joy when I saw Stelzner’s latest show was titled “Crisis Planning: How to Publicly Respond to Business Problems.” The guest on last week’s show was Gini Dietrich, the CEO of Spin Sucks, “a site that helps businesses thrive with their public online communications.” She talked about crisis management and how important it is for businesses – but how sometimes it can be forgotten.

Her podcast got me wondering how many people actually know the basics of crisis management? And even more-so, how are public relations professionals using it today? If you’re ready to learn about crisis management 101, keep reading.

What is Crisis Management?

Crisis management can be defined as, “ the act or practice of dealing with a crisis when it develops; an attempt to limit the impact of an unforeseen problem.” Typically, you see it in action when major companies (like Facebook and Wells Fargo) suffer from a public crisis or disaster that impacts customers or the general public. The crisis or disaster is usually large enough to impact the company’s sales or reputation.

When Do You Use Crisis Management?

You want to use crisis management when there’s a crisis; however, crisis management starts before anything happens. It starts with planning. One thing that Gini Dietrich said during her interview with Michael Stelzner was "if you’re planning for a crisis when you’re in the middle of it, you’re too late."

Planning for a crisis will help you react and diffuse a crisis in a quicker manner than if you had no idea how to respond to the chaos around you. Typically, the planning process calls for a brainstorm session to discuss every possible scenario that could be a crisis for your company. From social media trolls to natural disasters – nothing is off limits. The goal of this brainstorm is to come up with crises, discuss how you would handle them, and do some role-playing to practice how they'll be handled.

If this is something your company hasn’t done yet, add it to your next team meeting agenda. Dietrich recommends doing the initial brainstorm and then re-evaluating the messaging and responses you created at least once per quarter. While you can handle this activity and brainstorm session internally, you can also outsource it to a more experienced consultant or crisis management expert. That way you know you’re covering all of your bases.

How Do You Use Crisis Management?

Here’s the 411: A Starbucks manager called 911 on two African Americans who entered a Starbucks in Philadelphia and asked to use the restroom without buying anything at the store. The two were arrested, even though security footage showed they didn’t do anything wrong. This didn’t sit well with the community – for obvious reasons – and was addressed by Starbucks in a “courageous” or even “genius” crisis management response.

Starbucks actually did something – they took responsibility for their actions, and they took action. They decided to close all of their 8,000 stores and hosted a “racial-bias” training session for its employees. It was also recently announced that the company added a new policy that allows non-paying visitors to use their bathrooms and seating area. Now,  that calls for a toast - one hot dirty chai tea latte coming right up! 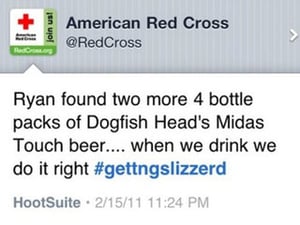 Social media managers typically manage more than one account, which is no exception for the nationally recognized non-profit, American Red Cross. Back in 2011 one of their employees accidentally shared a tweet that she meant to send out on her personal profile. And while the tweet was funny, you could tell it wasn’t meant for the business profile.

Wendy Harman, the social media director at American Red Cross, used humor to diffuse the situation and shared a tweet explaining the situation. And while humor can be risky (and difficult) to execute at times, she did it in a way that worked. Not to mention, she also acknowledged the mistake instead of trying to bury it – mad props for transparency.

Now that you’ve explored a little bit of the crisis management world, take a look at your company, agency, or business. What crisis should you be planning for? What crises have you gone through and what should you have done differently. Here at Leighton Interactive, we believe there’s always an opportunity to #getbetter – so why not start now? Or, get in touch with us so we can help.

I have a passion for communicating, coffee, and creating meaningful relationships. Each and everyday I make it my mission to chase one of my many curiosities and tackle it head on (usually with a dirty chai latte in hand).

Lead With Communications During COVID-19

8 Steps to Adapt Your PR Strategy in a Digital Era